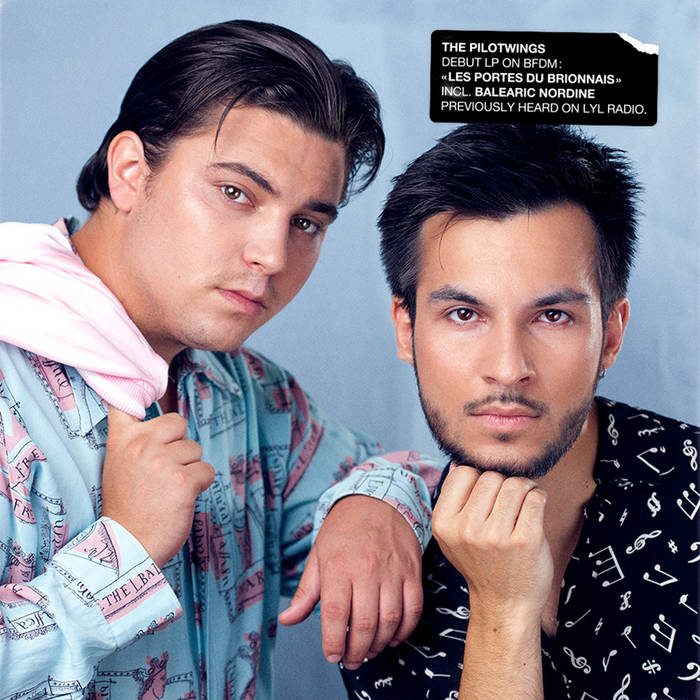 Clark Price This is a really excellent album. I see opportunities to play nearly every once of these tracks out.. Favorite track: B2 Christrance.

Nic Brown I'm not entirely sure the normally fun and frolicsome A&R department at Lyon's excellent BFDM Records have, by presenting the duo on the cover of their debut album proper as a couple of lecherous Portuguese wine waiters given to crooning the names of undrinkable varieties of Beaujolais to female customers in seedy nightclubs, opted for the most profitable of marketing strategies but there's no doubting the quality of the music hiding beneath one of the most dubious record covers in living memory. Balearic is a tag I've seen attached to The Pilotwings work fairly frequently and whilst it's not wholly inaccurate, "Les Portes Du Brionnais" isn't an album you'd find on a more purist imprint such as International Feel. If you prefer your sand dunes to contain a bit of grit in the form of sinuous basslines; melodies that are attention-snatching but don't allow you to nod off while you listen to them; angular percussion and vocal samples that aren't incongruous but would be like sudden blasts of cold air if they appeared in the warm, enveloping torpor of, say, a Mark Barrott record then "Les Portes Du Brionnais" should be right up your street. And mine. There's nothing like a spot of rule-bending to liven up one's day. That cover's still a shocker though. Favorite track: A2 Aladdinde.

Bandcamp Daily  your guide to the world of Bandcamp

outré black metal, with a Victory Over the Sun interview and music from Liturgy and Jute Gyte.